The Grand Canyon: Giant Hole in the Earth

By maisymak July 26, 2013 11 Comments
When your spirit cries for peace, come to a world of
canyons deep in an old land.
-August Fruge 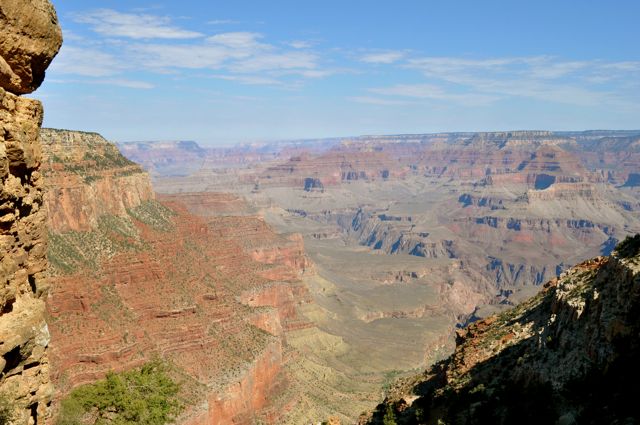 We are back from a whirlwind western trip.  I feel I’ve traveled the world, though it was only 6000 miles and a 3-hour time change.  I’ve decided I will never get so comfortable that I can’t pick up and leave and see a new piece of the world.  Home is where the RV is, right?
My parents have moved to Arizona, so the Grand Canyon was at the top of the TO SEE list this year. Who knows if we will ever have the chance again?  When the opportunity presents itself, I say grab that bull by the horns and charge!  After an 11-hour road trip with my sister (did you know Siri does not talk when there is no service in the middle of Hopi/Navajo country…ah!  thank goodness for old-fashioned things called MAPS) we awoke early with eight wee ones (children) and headed to one of the Seven Natural Wonders of the World:  The Grand Canyon.
It’s huge.  It’s a giant hole in the ground:  277 miles long, up to 18 miles wide and more than 6,000 feet deep.  One could get to the South Rim to the North Rim as quickly as the raven flies, except we’re humans.  And can’t fly from one rim to the next. Travel is a precarious situation.
The Grand Canyon is a result of the Colorado River cutting through the rock millions of years ago. Did you know the Colorado River touches seven states?  But the Grand Canyon is decidedly only in Arizona.
Do you like the history lesson?
The Grand Canyon is managed by the National Park Service, the Hualapai Tribal Nation and the Havasupai Tribe.  I like that. 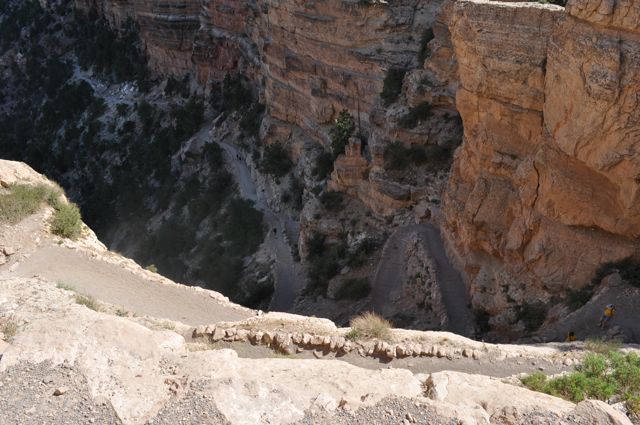 See that winding path?  That’s where we were going.
I am very afraid of heights.  I wish I wasn’t.  I wish I could look down and want to bungee, jump, and fly off the mountain, but an overwhelming cold inches over my body until I am near paralyzed.  Don’t tell Fear Factor; that’s the fear they would pick for me.  I blame this fear on a ill-fated hike up Timpanogus Mountain when I was ten, clinging to the side of a mountain, watching my mother and brother slip and slide down a giant glacier.  I remember looking down off the ledge I was scaling (we were lost), wondering what it would be like to die by falling.  That cold, overwhelming fear overtook me. Crying, I prayed that I could be teleported far, far away to a safe place, but soon realized quitting wasn’t an option; we either finished or… we didn’t.
We got down off the mountain far after sunset, and met the rescue crew who had started to search for us.  Fears.  Deep like the Grand Canyon.
A deep digression.  This is like therapy.  Thanks. 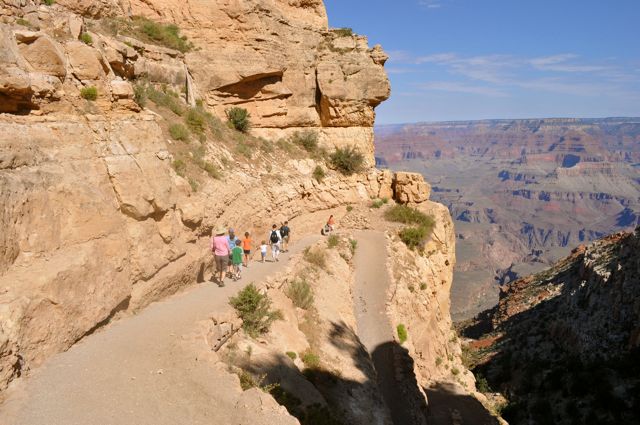 And so we set off, our brave little crew, down the winding rock paths 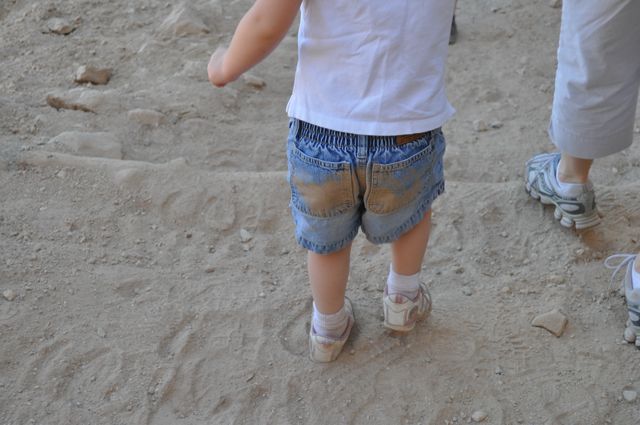 Pausing to sit down, drink water, and occasionally cry 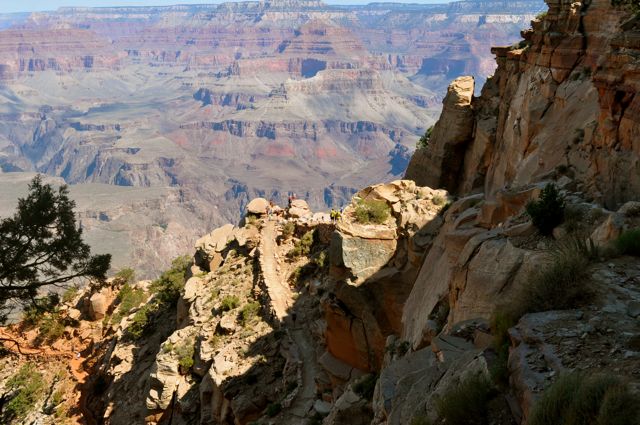 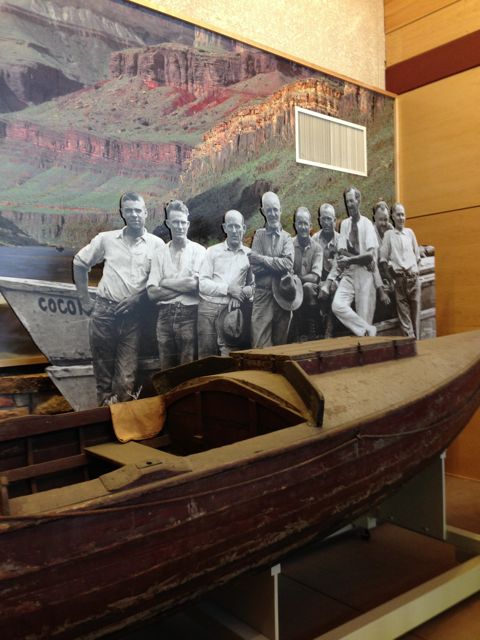 Here are the original explorers who saw more than a vast and barren waste land.  Many explorers came, including those appointed by Theodore Roosevelt (who proclaimed it a barren waste land).  Sadly, I had to admit, that had I been in the camp, I may have not recognized Grand Canyon potential.  I mean, you can’t exactly plant a garden in rock. 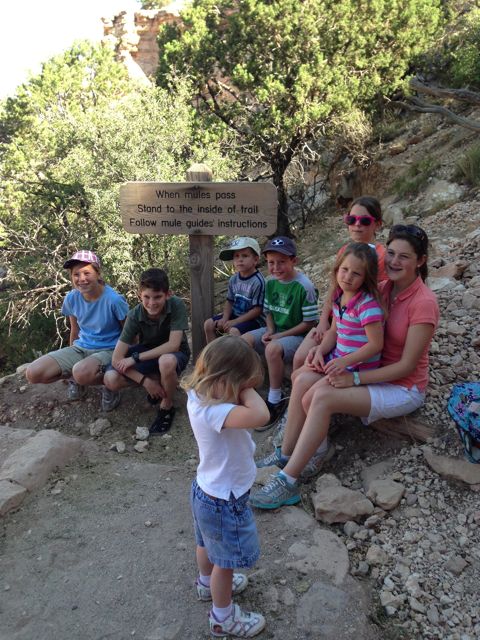 Here are the new explorers.  A mostly cheerful lot.  Except for the one, “i don’t want to be in the picture!!”  I was intrigued by the sign:  When mules pass, Stand to the inside of the trail.  Follow mule guides’ instructions.  MULES?  Where, mules, where? 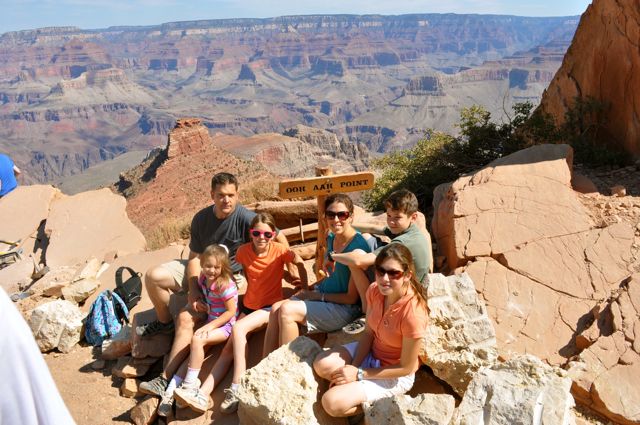 While looking for mules we arrived at the Ooh Aah Point 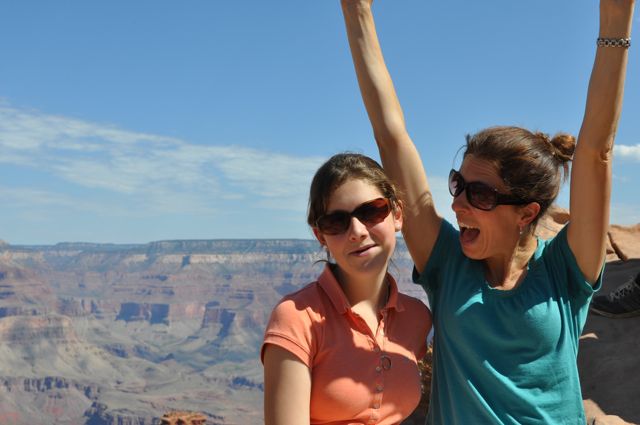 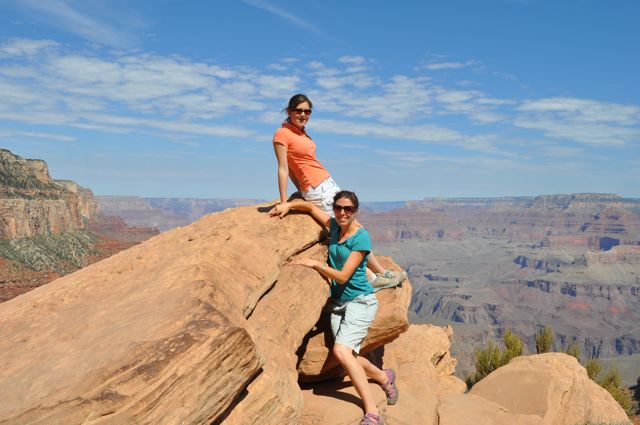 Then we had to take a picture on the cliff.  And I was scared.  And inched along the rock, trying not to hyperventilate.  Cope thought it awfully funny. 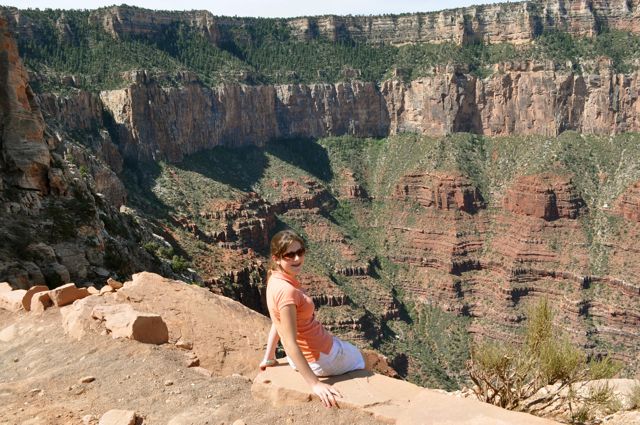 Nemo!  Get away from there!  Nemo!  Even the picture makes my heart thump. 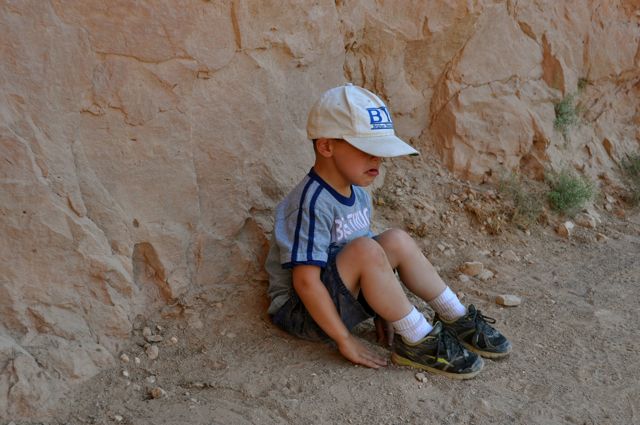 I don’t want to walk anymore! 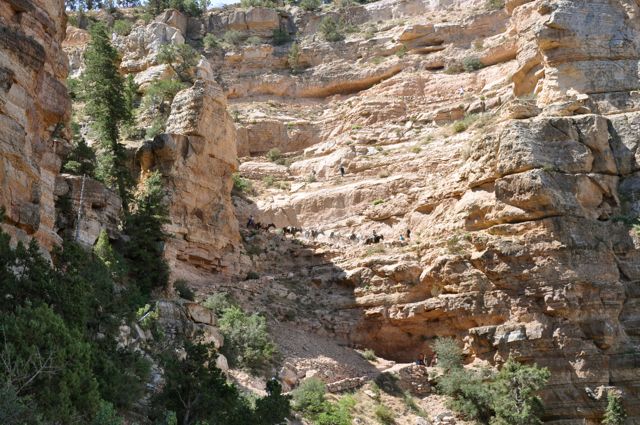 And then…to distract us from Nemo and crying…the mules began to come.  Do you see them making their way down the winding rock ledge? 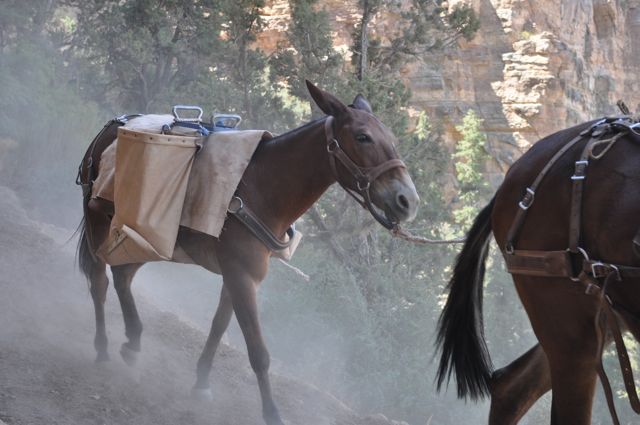 I was perplexed.  These are mules?  They look like horse to me!  They are carrying dirt and supplies down to workers working on the path.  They passed us three times going back and forth.  I felt bad for them, but wanted to ride them, too. 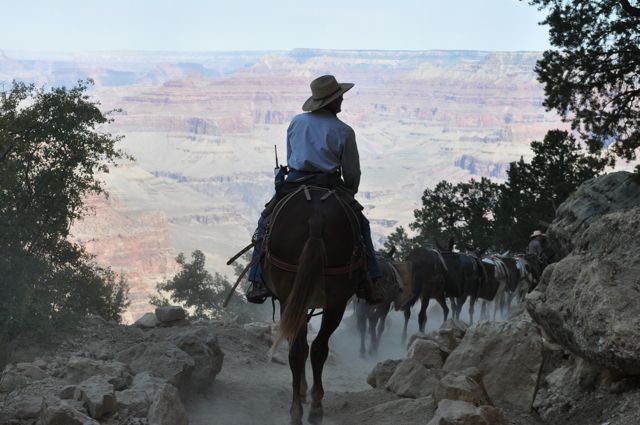 Lucky guide of the tribal nation.  She had beautiful long black hair and was very nice and smiled as we waited on the side of the path like good Grand Canyon hikers should.  Apparently there is a restaurant and a camp down at the bottom…someday. 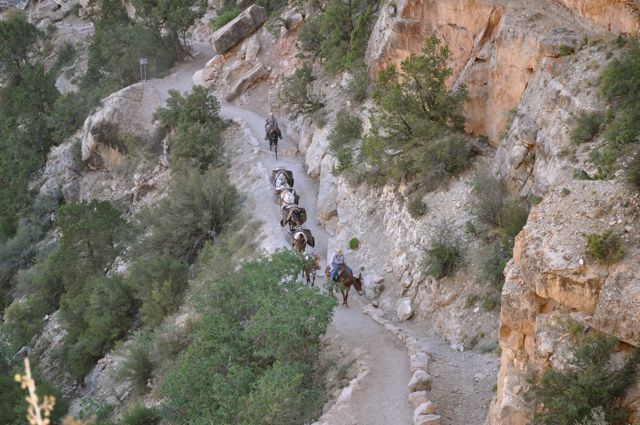 A view from the top.  Them is hard mule workers! 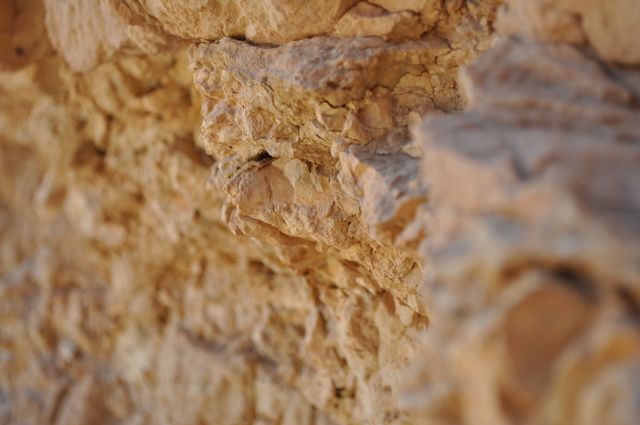 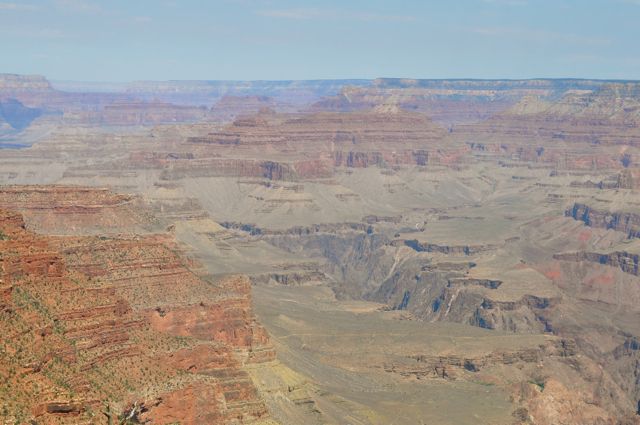 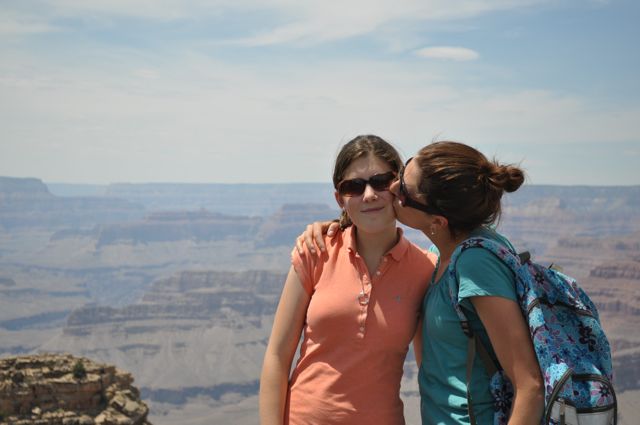 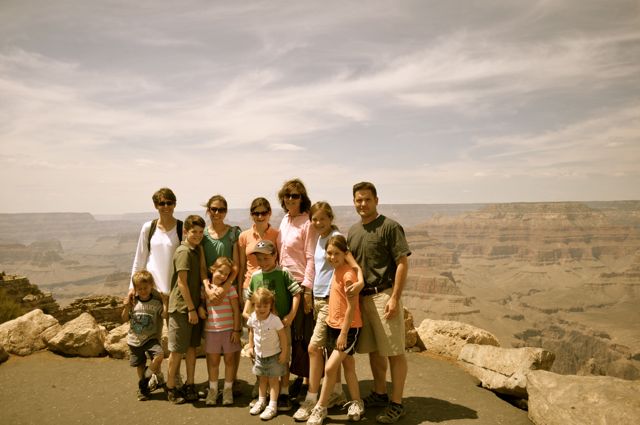 Whew, we made it all the way out to Hopi Point. We did take a shuttle in the end, thankfully.  It was a momentous, and sometimes arduous journey that made us feel exhilarated and slightly nauseous all at once – the perfect adventure combo! 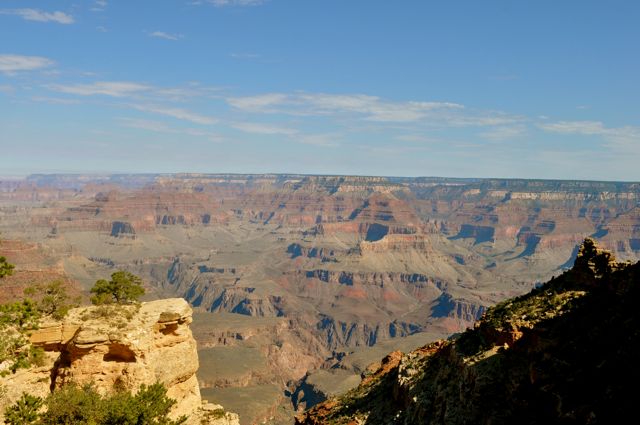 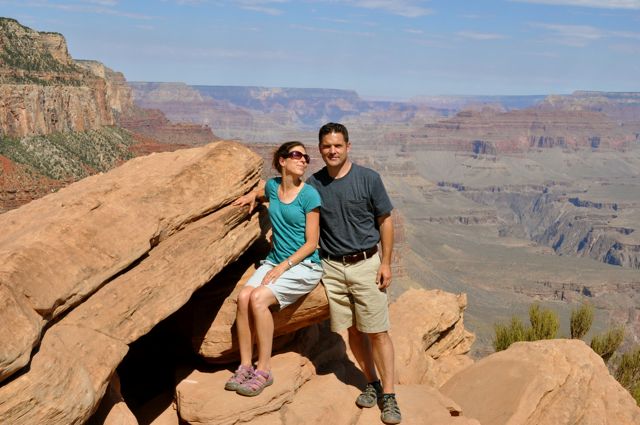 Oh, darling, please don’t let me fall off the cliff.  Here we are after almost 16 years of marriage…so lucky. 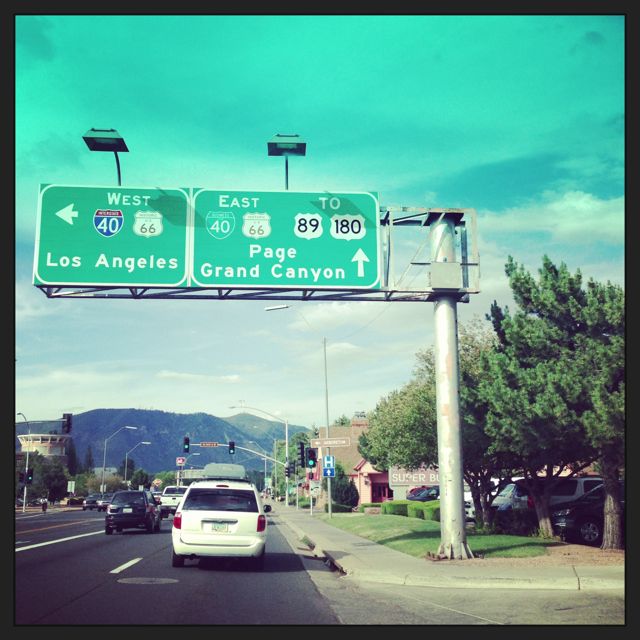 And then we were off to another adventure, through the desolate deserts of Arizona.
Now that the first of the seven natural wonders is crossed off the list, which one should be next? Perhaps Rome?
For each man sees himself in the Grand Canyon-
each one carries his own Canyon before he comes, each one
brings and carries away his own Canyon.
-Carl Sandburg
Wondering…what Canyon did I bring and what Canyon did I leave with?