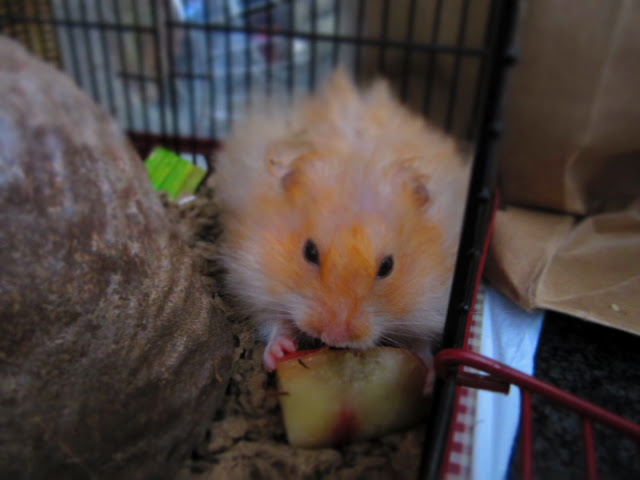 Sweet Peanut
I practically begged my friend, Becky, to let us keep her child’s hamster for the summer.  One, Peanut is adorable.  Two, my children are constantly begging for a pet and babysitting for two months out of the year is the perfect solution.
Peanut came to us obviously very well cared for.  A nice cage, toys, hamster wheel, outdoor hamster wheel, special treats, 5 star bedding.  The only thing children didn’t like:  Cleaning the cage.  But it took less than 15 minutes and between the four of them, it’s a piece of cake.
I don’t know if all hamsters are nocturnal, but Peanut was.  He liked to sleep during the day and then I would hear his wheel turning at night.  My admiration grew:  This was a hamster who got his daily run in!  I think he was training for a marathon.  His mileage was very impressive.  He also liked to eat my apple cores.
As you may have noted, I am writing in the past tense concerning little Peanut.  Yesterday I told Nelson he had to clean the cage as it had been a week and this humidity was not helping the odors in this house.  So, I moved the cage to the table so he would be sure to be reminded and I would be sure to nag lovingly remind him.  I noticed our dog, Tenny, was going crazy, crazy.  He was running around, barking, crying, being very annoying.  I don’t know why some days he’s like that with the hamster and some days not.  But, our doggy cannot reach the table, nor can he jump up on it, so we left for a morning of soccer camp.
Do you feel the impending doom?
Our dog did not eat Peanut, but when we came home from soccer camp, I went to visit our little furry friend.  To my horror, Peanut was lying in his cage in apparent state of frozen fright.  He was very, very still.  Oh dear.  Have you ever been entrusted with a very special possession or pet?  My first thought was, Please no.  Becky’s going to kill me.  Nelson’s first audible thought was, Ronan’s going to kill me.
Becky has made several attempts to give Peanut away, but her son, Ronan, loves him so much, that they just couldn’t do it.
Many thoughts went through my mind:
Buy a look-a-like!
This really didn’t happen.  Close your eyes and try again.
Run far, far away
Go call Becky right now
Becky was getting on a carousel with her son, a perfectly wonderful summer day.
She was very nice to me.
Oh, it’s a horrible feeling to be responsible for something you are…not responsible with(?)
My children offered several possibilities:
He was too hot (it was a very hot and humid day)
He was poisoned!
He had a disease
He was old
His cage wasn’t clean enough (Nelson’s lament)
He had a heart attack because of Tenny (Cope’s theory)
I don’t know.  But I better stop writing.  It’s making me feel worse.
Becky asked one thing.  Was it possible to save Peanut for Ronan to see when they get back for school?
The only solution seemed to be cryogenics. 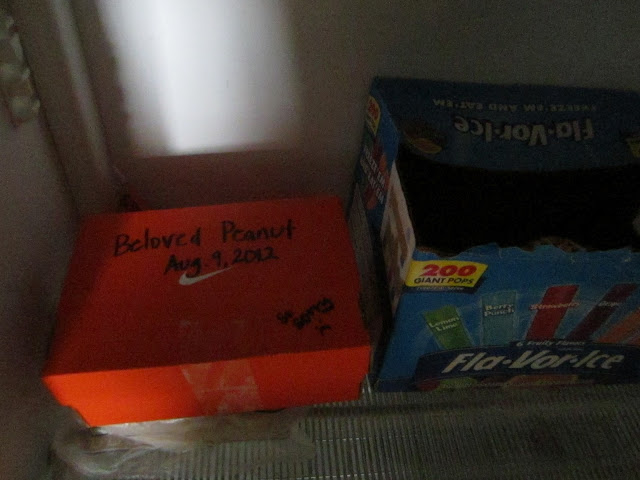 Here Peanut lies, next to the freeze pops.  He was put in a Nike shoe box in honor of his nightly runs on the hamster wheel.  It was a sad end.
When you were a child, did anyone ever kill your pet?