By maisymak August 8, 2012 7 Comments
Miles run:  4.
Huffing and puffing.  Walking up hills.  I hide my head in shame.  I completely blame it on the Olympics.  These late nights are killing me.  On the other hand, I wouldn’t take back seeing Michael Phelps win his 22nd Gold Medal or Gabby win the all-around or McKayla’s “devastating” silver vault.  Oh no.  Fatigue is worth watching the great.  I love the competition.
My morning run almost didn’t happen at all since we lost power due to a terrifically-needed rainstorm.  I woke up to the sound of a text and the clock flashing.  The text was from my running buddy who was pulling out of my driveway at 5:15.  I ran after her to no avail (in my pajamas and wild-haired glory).  Feeling very guilty, I tried to go back to bed, but guilt is not a resting state. So I got back up and went by myself.  And later dropped off my guilty conscience in the form of homegrown green beans on her porch.  Feeling like a loser.
My whole family is, shall we say, a tad bit competitive.  I mean this in a wonderful way since I’m a tad bit  itsy bit a lot bit competitive.  I like to beat people.  Just gettin’ it out there.
I don’t often feel competitive when it comes to mothering (because my mother is in my head saying, because that would be stupid.  She really has a way of telling you how she feels.)  I usually don’t feel competitive when it comes to appearances like purses, cars, clothes or tans (Cue mother:  because that would be stupid) although I have my moments (read: hair).
No, the competition is always the physical type.  And it started early:  I was fighting in the womb.  Born 10 minutes earlier than my twin brother, I came out bruised and battered.  At this early age, I recognized the physical fight as my one true talent.  Math?  Forget it.  Running and monkey bars?  Oh yes.  I only stopped wrestling the boys to the ground after I was tattled on and had my shirt torn off.  Not that that bothered me.  That boy was pinned!
I’ve never wanted to be on a reality show until last night when I saw “Stars and Stripes,” a new realty show where “stars” have to compete like navy seals.  Green with jealousy.  Am I not star quality?  And I was not asked.  How rude.
I chose no docile lamb for a mate.  I married an uber-competitive boy.  It sometimes strikes me as a terrible tragedy that we still, after almost 15 years of marriage cannot go for a run together.  Can you see the scene?  His foot gets an inch of front of mine.  My stride goes a little further than his.  And pretty soon we are at an all-out sprint.  Playing soccer is, shall I amicably say, a push and shove event (this picture does not capture what he did to me.)
While on vacation, I began to ponder my love of competition.  And that of my family’s: 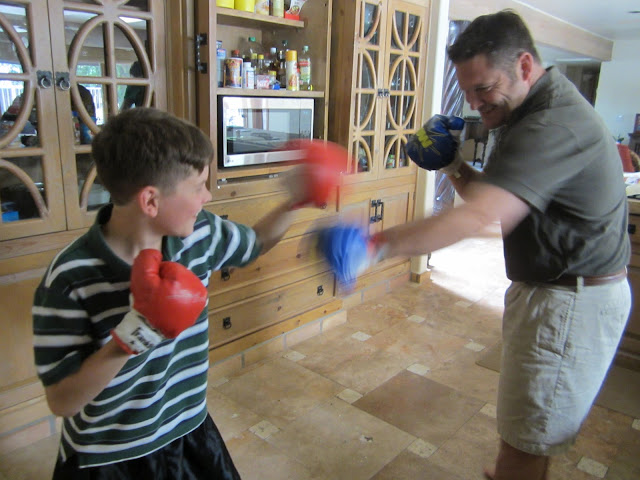 Nelson is going for the knock out punch against his dad. 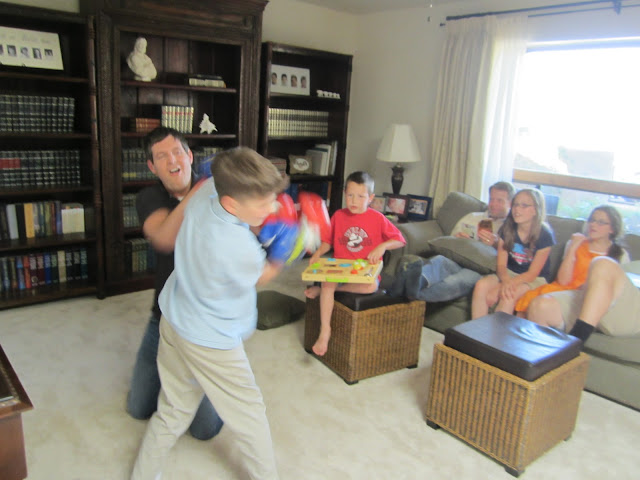 Cousins look on as Uncle Eric beats up my little boy, who is still in his church clothes.  (This description is competitive in that it will force Eric to actually comment on my blog and defend himself.) 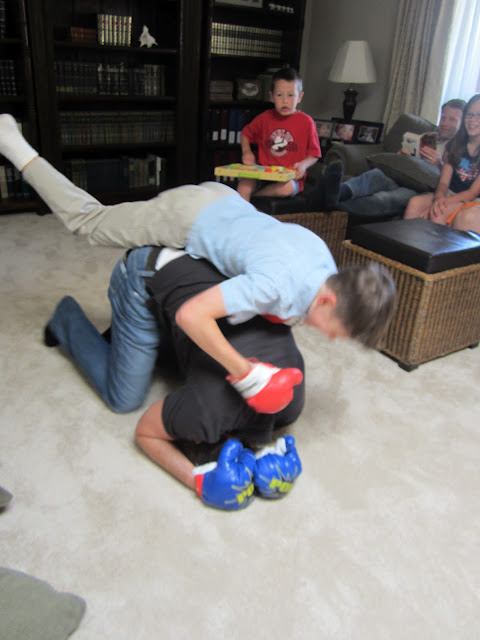 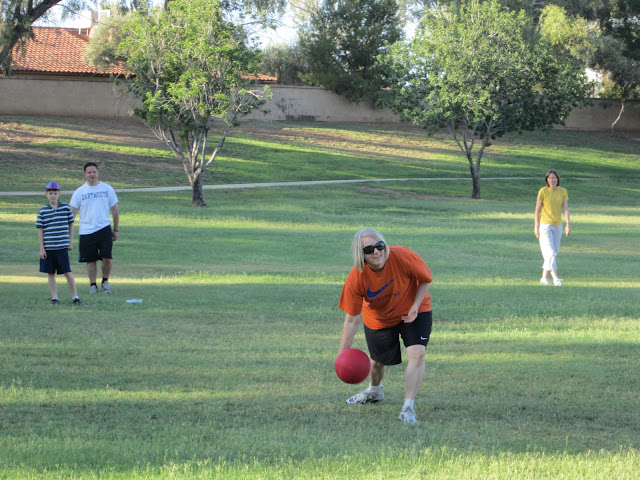 Now.  Let us move on to sisters-in-laws.  You wouldn’t look at Allison and say, “Oh yeah.  That girl will kill your kid to win a kickball game.”  But you don’t know Allison.  She dragged us out of bed at 5:30am to play kickball.  The next morning when she wanted to go hiking, Eric said, “I get up once at 5:30 for you.  Not twice.”  Ally…you know I love you and your love of the kickball game!!! 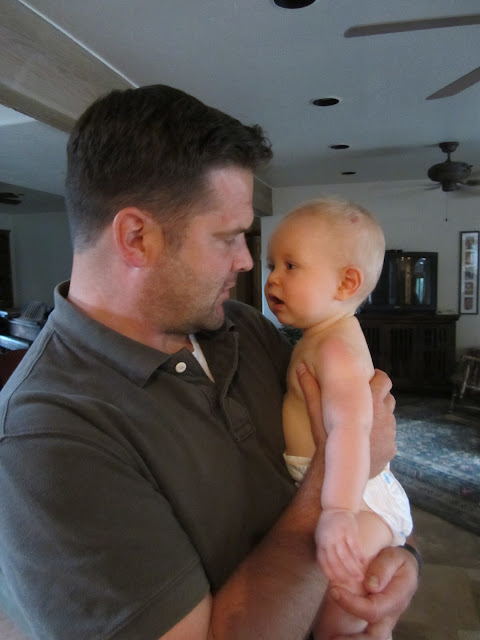 My mother pressures us into having more kids by appealing to my husband’s competitive streak.  He’s not budging.  Not even while holding Sydnie.  And that’s not easy to do.  sniff sniff. 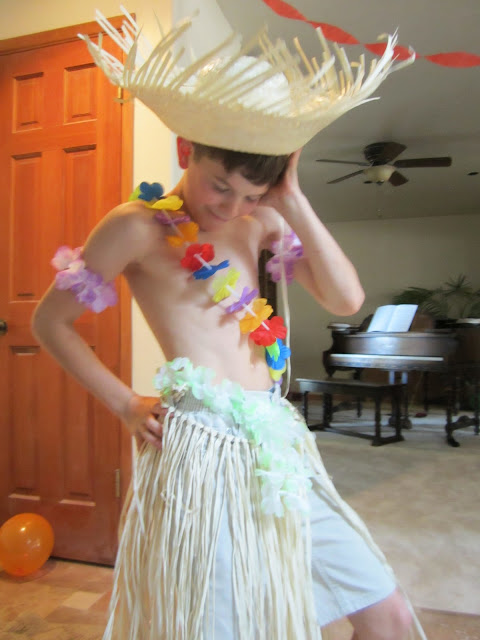 Nelson is starting to compete with Uncle Eric’s “Funniest Man” title.  Here he does the hula for many laughs. 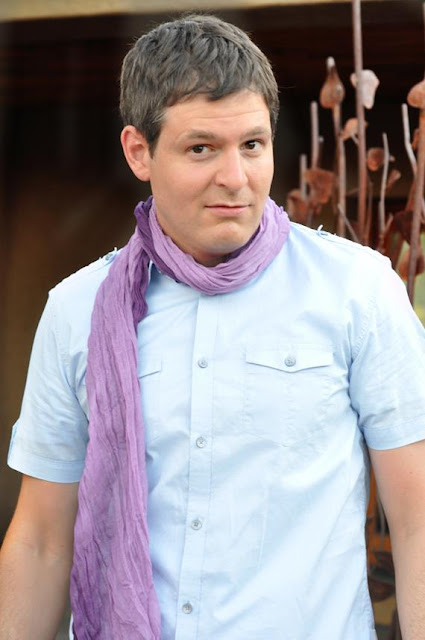 But then Eric wears the purple scarf for the family picture.  After an animated and lengthy discussion that began with the pros of heated shaving cream, we had a secret paper vote on who was the most “metro” in the family.  I think this picture says it all.  There was an overwhelming majority vote.  Eric turned to me in outrage, declaring me a traitorous sister. 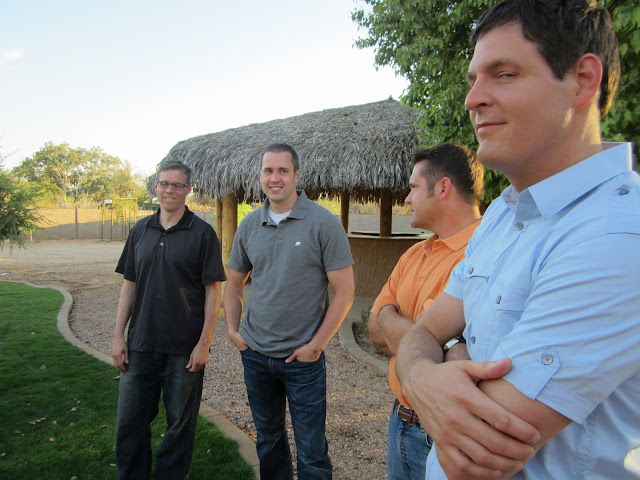 The brothers compete physically, with wit and with argument.  And then there’s the cool factor.  Patrick likes to sigh and say, “Yep, still got it!” 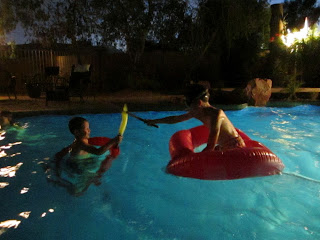 While swimming in the pool with my siblings and acquired siblings, we began to have races – who can swim the fastest?  (Depends on who’s cheating)  Who can hold their breath the longest?  (Andrea)  Who can do the best hand stand?  (Cassie)  Who looks hottest in their bikini?  (Patrick of course!)  While the adults compete in the pool, the kids sword fight in the pool.  Until someone is bawling.  (Eric) 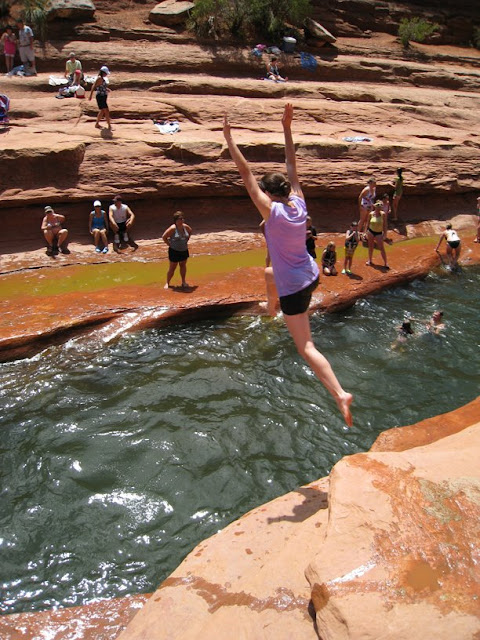 You know the expression…if someone dared you to jump off a cliff, would you do it?  Duh!  Of course! 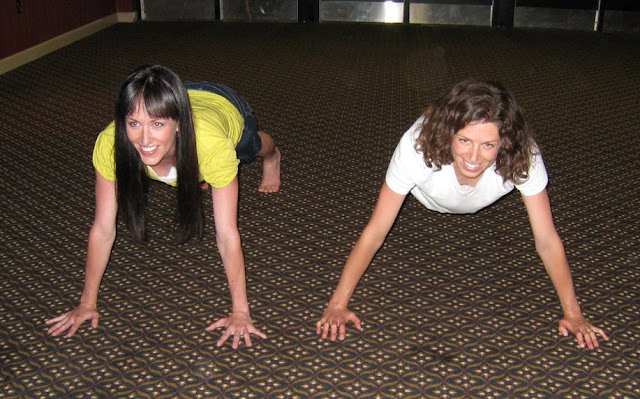 This past family reunion was the first time a sister-in-law challenged me to a push-up contest.  Who won?  I wouldn’t want to embarrass anyone on this blog so we’ll just say, hahaha, I won, I won!!!  Oh.  Except that’s what she’s saying to me.  But only by 5.  I better get back to boot camp. 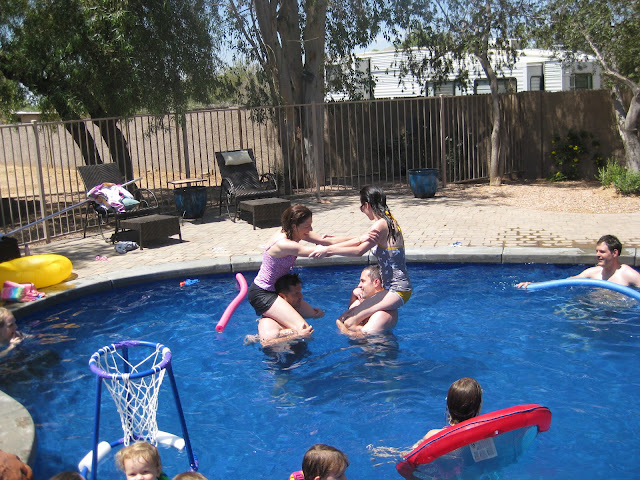 She also wanted a chicken fight.  I was stricken with indecision.  I only fight with my brothers.  I hate girl fights.  But geez, I was challenged.  What’s a girl to do?  I was actually down in the water when Gregor suddenly whipped me back into the air like a slingshot.  Oh no, he wasn’t going to get beat by a girl. 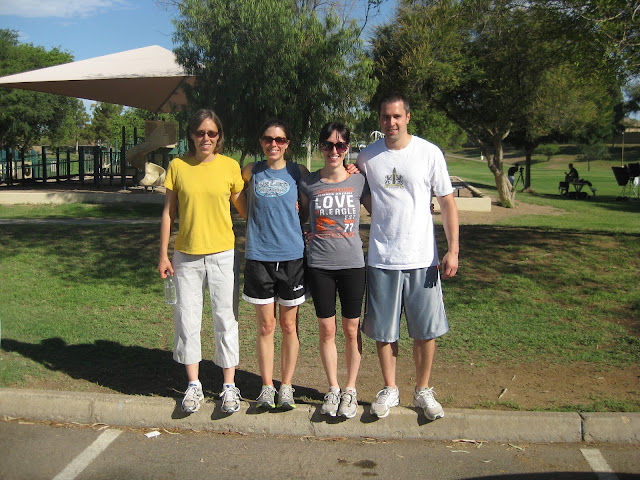 When I told the family I wanted to have a 5k back in the winter my brother actually started training.  “I don’t care if I win, but Amy is not going to beat me.”  Have you ever tried to run 3 miles in the middle of the morning, in the summer, in Arizona?  I seriously thought I was going to have a heart attack.  He beat me.  Whatever.  I like to help people feel good about themselves. 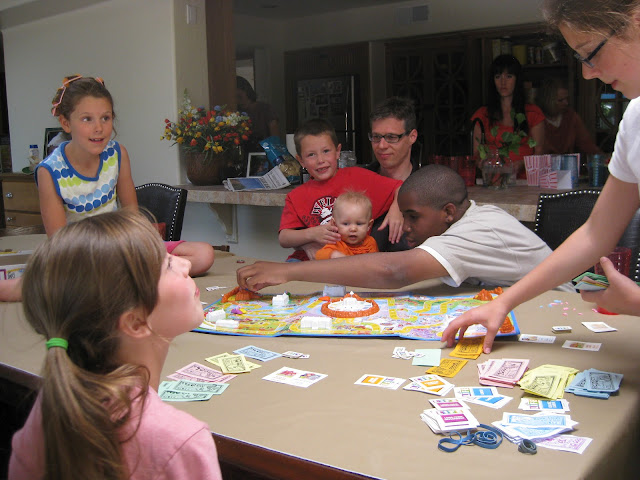 The kids compete in the game of Life. 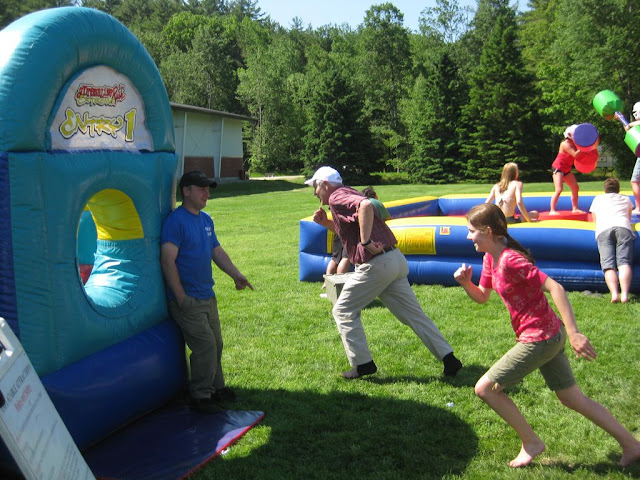 A highlight of my life was watching my dad go one-on-one against Cope in the big bouncy house this spring.  He suffered a bloody nose and broken glasses but was a jolly good sport. 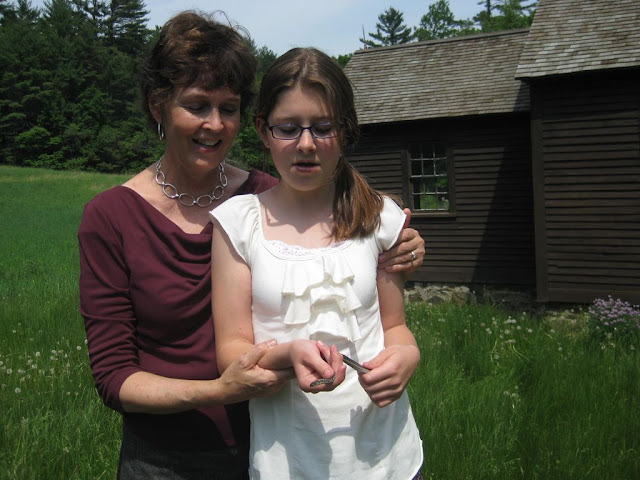 My mother pressures Cope to touch and hold snakes.  Again, the use of the word “chicken,”and “weeny” and – If I can do it, you can do it! 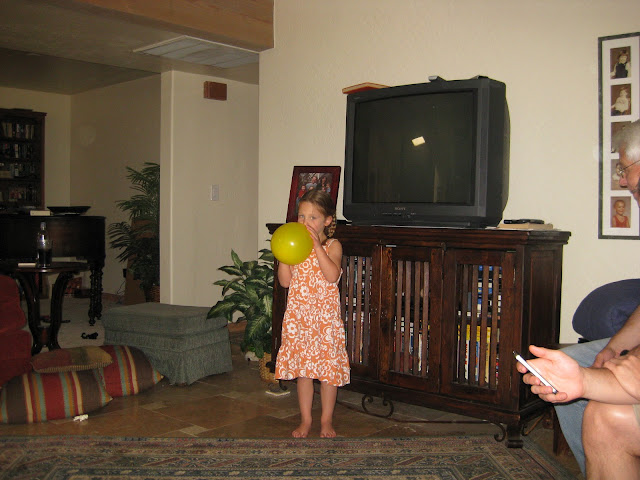 Every year we have a family talent show.  Paige’s talent was blowing up a balloon.  The highlight though is to see what Eric will do. (I do have two other brothers.  Eric is just emerging as the most competitive.)  This year he did a Gregor roast.  It was quite hilarious and I filmed it, but sideways.  Maybe I’ll post it anyway.  Honey will surely appreciate it. 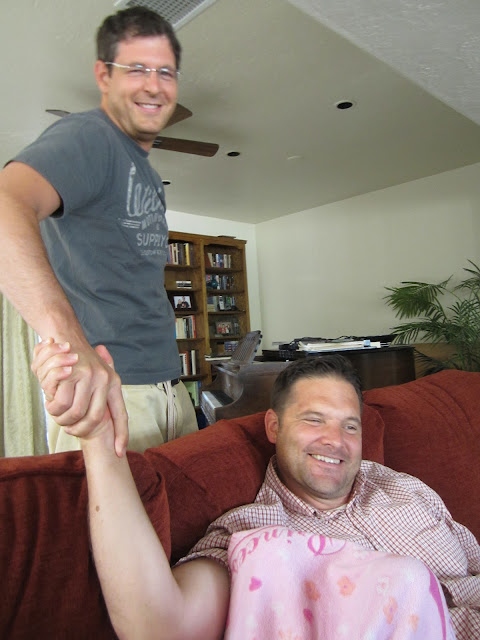 But at the end of the day, we are still good friends.  They can even shake on it.
Is your family competitive?  Do you like it, love it or hate it?