Chicken in the Kitchen

By maisymak February 8, 2011 One Comment
One of my least favorite jobs in the winter, especially a particularly freezing cold snow day is to wade through knee-high snow drifts with a pitcher full of water to feed chickens.

But what’s even worse is wading through knee-high snow drifts, finally making it to the coop, and finding dead chickens.  Yes, I’m sorry, it’s true.  How could this be?  The coop door was shut tight! There was no possible way a giant animal came calling.  No this killer was the small innocuous-looking furball named The Weasel.  I saw it on the rafters but didn’t make the connection – how could this tiny animal kill my chickens?

I tromped up to the house, paced back and forth wondering what to do.  Call Gregor?  Please come home and get them?  Wait til he got home?  Oh, I really really really don’t like dead things.  I’m not really an animal person.  Really.  I just pretend to be on this blog.  So I went back down and The Weasel had killed two more chickens!  At this point Cope (it was a snow day) chimed in to tell she had read about weasels.  They kill for fun.  They don’t even want to eat the chicken.  Just like that, for a little bit of fun, The Weasel had wiped out our entire flock.
Except for one.  The last remaining chicken was perched on a ladder, trembling in fear.  What do I do with one chicken?  If I left it, it would surely die.  I contemplated doing just this.  I could wash my hands of it and pretend it flew away to live in Florida.  Happy and content.  But that darn weasel was lurking.

The kids came down with me and tried to catch The Weasel.  We brought Tenny down and he tried his darndest to catch it too but it was crafty and sly and kept slithering down holes it had made in the coop.  So we decided we could only do one thing. 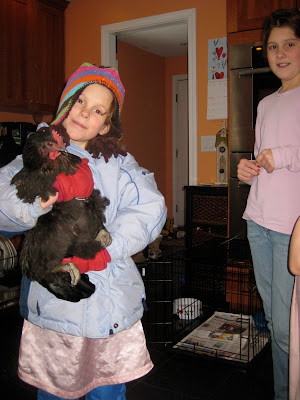 Brynne grabbed that chicken and brought it into the house.  I got the kennel. 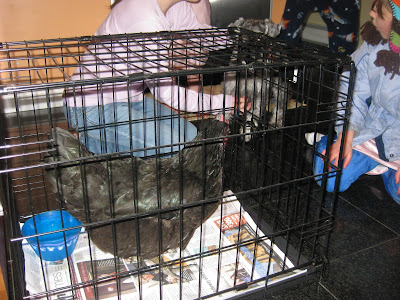 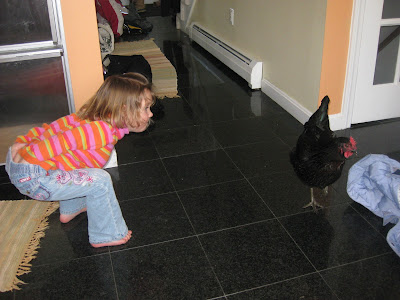 It was kindof fun at first.  But chickens have a reputation for being messy.  And smelly.  When we cleaned the kennel it walked around the kitchen.  Paige tried to catch it. 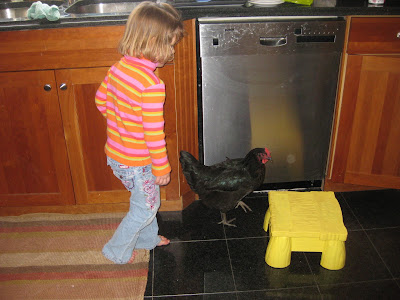 But she was kindof scared. 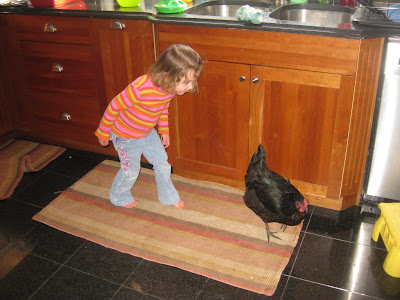 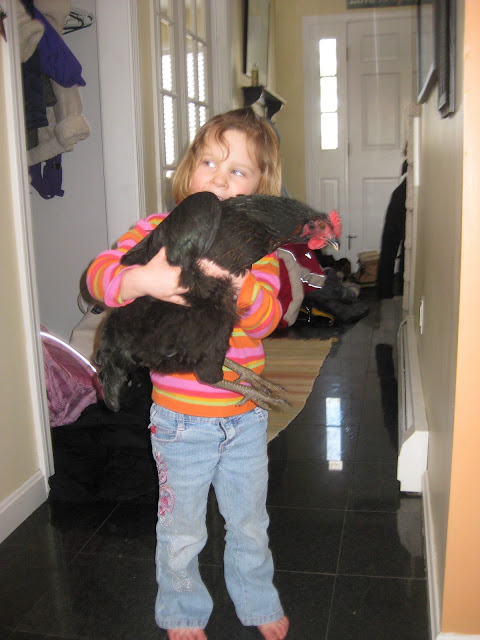 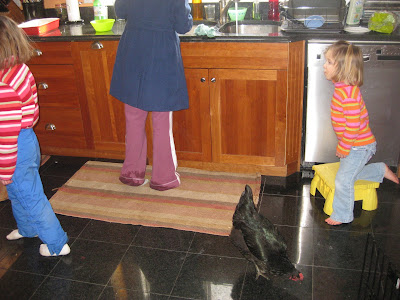 The novelty has worn wore off and now we just had a chicken in the kitchen.
And now I want the chicken OUT of my kitchen.  It is driving me crazy.  It is messy and stinky and has been warned that the garage is going to be its new home.  Poor chicken.  It has laid an egg for me everyday though.  This chicken needs a coop.  She needs some nice friends.  Or maybe you’d like your own chicken in the kitchen?  Free delivery.

What did we do with the deceased?  I bribed Brynne with a treat if she would “help” me.  I held the black garbage bag open and looked away.  With no hesitation she grabbed each one by their feet and dumped them right in.  1, 2, 3, 4.  Done.  I did not think about what I was carrying all the way through the knee-deep snow drifts.  It was heavy.  With some chicken claws poking through the bag.  Ew!

Will we ever have chickens again?  I just can’t answer that question yet.